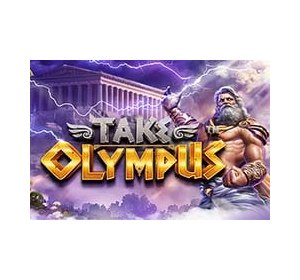 With the Gods on your side, fame and fortune is waiting for you!

Take Olympus is a fast moving and high impact 5 reel, 50 pay line slot bursting with features and enthralling gameplay. This is Betsoft’s third release to showcase their spin-cycle feature. First appearing in 2019’s mega hit Take the Bank and 2020’s Christmas special Take Santa’s Shop, this element further enhances the excitement and gameplay of the new release. Player response to the concept has been hugely positive. Further releases using this mechanic, whilst showcasing novel storylines, are expected later this year.

Set in the ancient Greek uplands, Take Olympus offers the help of four Gods – Apollo (the sun God), Poseidon (the sea God), Hades (God of the underworld) and Aphrodite (Goddess of beauty and love). Together, working in cycles, these Gods will use their powers to lead you to Zeus, the Father of all Gods and to your just rewards in this feature rich slot.

The Cycle of the Gods randomly triggers any of the five god features. Their power is unleashed on the 10th spin. Subsequently a new cycle and the reign of a new God begins with a new feature guaranteed.

The Wrath of Abundance feature brings WILDS from Apollo and MYSTERY BOXES from Aphrodite. FREE RESPINs are Poseidon’s gifts while Hades and his hellhound blast forth a MULTIPLIER which is applied to any win on the final spin.

Your path to Zeus, the sky god himself, is through the ALLFATHER’S GRACE feature. Depending on the god whose powers he has absorbed through the Wilds, Mysteries, Abundance and Chaos of Zeus features, be ready for 5 or more WILDS on the reels, big MULTIPLIERS, additional FREE SPINS and 5 or more symbols to be turned into mystery symbols.

Packed with ancient Greek imagery, this slot is destined to go down in history, not least for the chance of 2328x your bet to be won. All you need to do is spin your way through to Take Olympus!

Are you eager to try out Take Olympus after reading all the details of it? Fret not, IBC003 has got your back! Log into your IBC003 account now and start enjoying all BetSoft Slot Games! You can even get extra bonuses with every deposit you make! Isn’t it better when you can have more money to start playing? Good luck!