Base on our customer statistic from our system for the month of May 2017, below are the top 5 SCR888 Slot Games Ocean King is one of the famous slot game in the year 2016. It is an online casino hunter fish game with shock powerful laser gun. Shooting the fish to gain the point and win credits. There are a lot of functions in the game, you can change weapon in anytime during the game. You can also choose to aim for the target, shoot the golden dragon fish and you will definitely get a wonderful pay-out. Place your bet bigger to make your winning higher. There are many creatures in this game, over 10 creatures in the game fish list. Ocean King programmers release the second generation of Ocean King: Golden Legend in 2016, that is the Ocean King 2: Ocean Monster.

Dolphin Reef is a well-known casino slot game. This slot game has 25-line video slot game with extra features – a Scatter bonus, Free Games bonus and Gamble feature. As mentioned the game has an underwater theme and uses reel symbols such as dolphins, fish, turtles and treasure chests. Different bonus rounds definitely seem very attractive! Dolphin Reef, besides expanding wilds (the Dolphin symbols, of course) offers to scatter pay-outs and free spins. The Dolphin, appearing on reels 2 and 4 at the same time, activates the free spins and stays expanded during those. 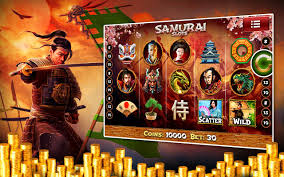 Silent Samurai-The way of the warrior awaits the player in the exotic new slot game. The bonus round sees the player battling a fierce ninja army for free spins and multipliers. 5 Wilds pays 5000x line bet! 5 Scatters wins 100 free credits. Up to 27 free spins with a 20x multiplier! Bonus symbols on reels 1 and 5 start the bonus game. The goal of the bonus round is to fight off 20 fearless and mysterious ninjutsu soldiers by throwing stars known as “ shurikens.” Players must hit 18 of the 20 ninja warriors assaulting the village. The ninja army can drop the following prizes: 13 free spin prizes, 3 multiplier prizes, and 2 special ninjas. Special ninjas automatically drop up to 3 ninjas for the player. The army also contains two fast ninjas that end the bonus game, rewarding the player with the free spin and multiplier wins he has accumulated thus far. Fast ninjas are worth 1 free spin. Monkey Thunderbolt, is the easiest and funniest slot to play. Monkey Thunderbolt is obtained from the old story about the legendary monkeys in the world of the monkey of Chinese. With lovely and friendly monkeys, not only can you play this slot to relax and release your stress, but also play it for big rewards. Place your bets on your preferred monkey! You can also place bets for runner-up and for the monkey that will finish on 3rd place. The appeal of the Monkey thunderbolt slot game is that it offers huge jackpot with generous bonuses together many different amazing prizes.